27 Exciting Meditation Statistics You Need To Know in 2022 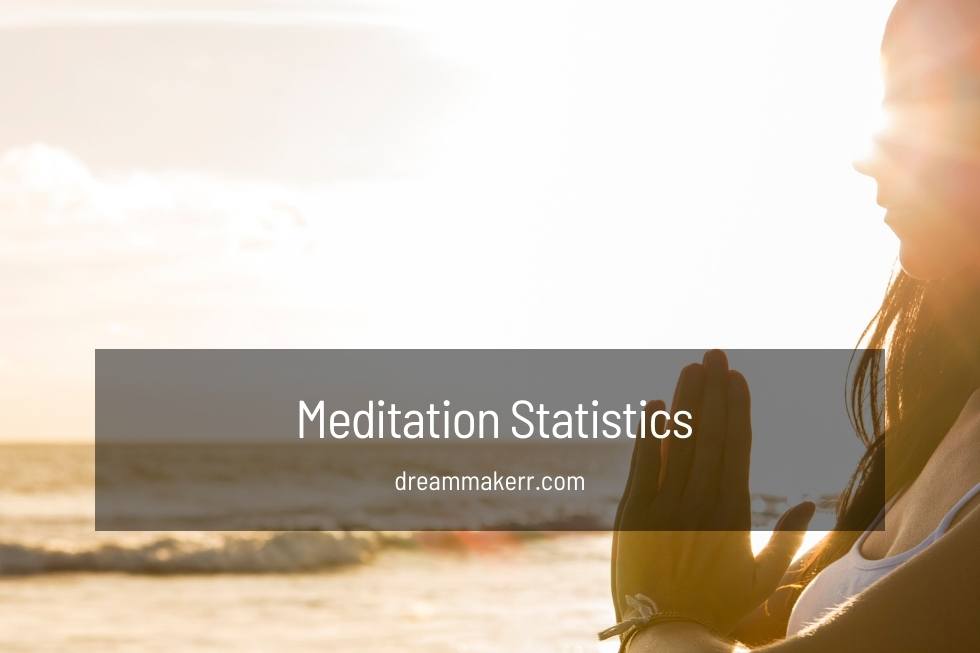 With more individuals meditating than ever, here are the most recent meditation statistics you should be aware of and how they can enhance your well-being.

Meditation is a collection of mental activities designed to develop awareness, tranquility, and relaxation. According to the most recent meditation data, the practice’s popularity is growing as more people meditate regularly. It’s not a big surprise that people are looking for new ways to unwind in today’s demanding atmosphere.

However, there are also other benefits of practicing mindfulness. Many mindset statistics have shown that this mind-body method can lower blood pressure, relieve pain, reduce the risk of depression, and increase overall well-being.

Continue reading to find out more about modern meditation practices.

Statistics On Public Acceptance Of Meditation 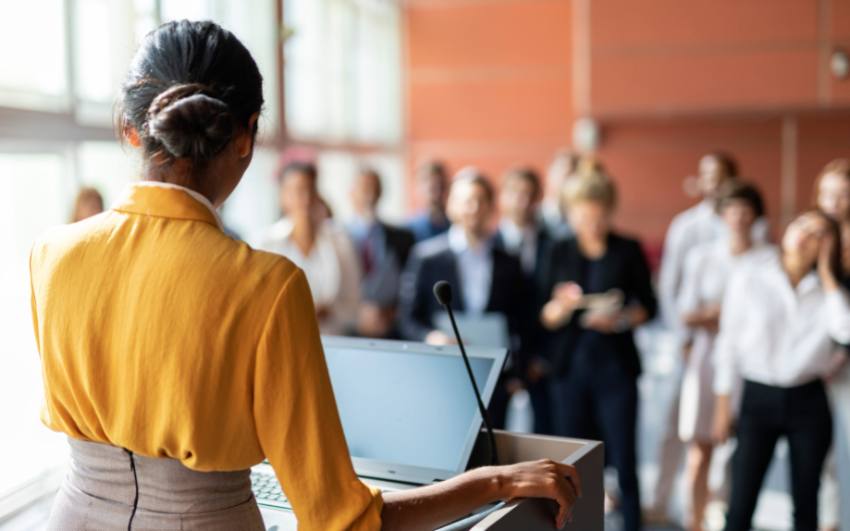 Meditation is becoming increasingly popular with each passing year. We’ll look at the popularity of mindfulness in this section on meditation statistics and public acceptance of these types of practices.

1. Millions of people around the world practice meditation, according to experts.

The last few years have seen a massive rise in the number of people who meditate regularly. Considering all the benefits to one’s health, it makes sense that more individuals are opting for this de-stressing method. (200–500 million individuals worldwide)

2. About 14% of Americans have meditated at least once.

In addition, the 2013 Pew Research Center poll reports that around 40% of American adults meditate at least once a week.

The CDC’s study on the use of yoga, meditation, and chiropractors among Americans aged 18 and older is an excellent source of data related to meditation. From 2012 to 2018, the percentage of people who meditated in the previous year rose significantly, from 4.1% to 14.2%.

The number of people utilizing meditation and yoga apps has increased, leading to more demand for these services. Many workplaces and educational institutions are meeting this demand by providing on-site courses.

Statistics on The Benefits of Meditation

Now that we know what meditation is let’s explore the advantages of this practice. Meditation has been linked to a variety of health benefits. Meditation can be used as a tool to improve overall wellness.

4. Meditation is a way to improve your health. A lot of people use it for this reason.

According to a poll of over 2,800 people, general well-being is the most popular reason for meditation. However, other reasons, such as increasing energy levels (60%), improving memory and focus (50%), and relieving anxiety, stress, and sadness (76%), are also practical benefits that come from regular meditation practice.

5. In most cases, meditation can help reduce anxiety by 60%.

After meditating for 6-9 months, almost two-thirds of people with anxiety disorders saw a reduction in their symptoms.

6. Heart disease may be reduced by 87% through meditation.

Studies into meditation have shown that people who regularly meditate are less likely to suffer from heart disease. This is because meditation helps reduce tension and stress, both of which have been linked to serious medical problems.

7. In the majority of instances, meditation treats insomnia symptoms.

Most people who meditated daily could fall asleep faster than those who did not. 75% of them fell asleep in under 20 minutes. Furthermore, 91% of insomniacs reduced or eliminated their use of sleeping medicines.

8. Meditation has been shown to lessen PMS symptoms by 57%

According to meditation research, women who meditated experienced fewer somatic and psychological PMS symptoms. Meditation helped to reduce symptoms such as anxiety, irritability, depression, and bloating by 57%.

9. Meditation can help people with insomnia lose roughly half of their average wake time

Meditation may help insomniacs, according to a study on the efficacy of mindfulness-based therapy for insomnia.

10. Meditation can assist you in overcoming back discomfort

11. Approximately 73% of the time, mindfulness meditation can be used to treat post-traumatic stress disorder (PTSD)

The study looked at mindfulness-based cognitive therapy’s effectiveness in treating posttraumatic stress disorder in veterans. Given that 73% of them reported improved symptoms, more research into the effects of meditation is required.

12. Meditation has been shown to reduce blood pressure 80% of the time

13. You might expect a longer attention span after only four days of meditation practice

According to one study, mindfulness meditation has also been associated with benefits in visual-spatial processing, working memory, and executive functioning.

14. Meditation has been shown to boost grey matter

According to Harvard research, 30 minutes of daily mindfulness meditation enhances hippocampus grey matter. Because the hippocampus is in charge of memory and learning, this is a crucial meditation fact.

15. Meditation has been shown to boost memory and cognitive performance

After eight weeks, adults who meditated for just 20 minutes a day increased their memory recall by 10%. Additionally, elderly persons who meditated were able to keep their cognitive function.

16. Women meditate at a higher rate than men

According to the survey findings, whites were more likely to practice meditation than blacks (13.5 percent) and Hispanics (10.9%). This shows that meditation’s popularity differs among different population groupings.

19. According to a recent poll, 89% of all Buddhists in the United States practice at least once a week

It is perhaps not surprising that this is the case. On the other hand, meditation is widely practiced by Americans of various religious backgrounds. The proportion of Evangelical Protestants who meditate at least once a week is 49%, while it is 77 percent among Jehova’s Witnesses. According to these meditation facts and statistics, around 25% of people who are not religious or identify as atheists practice meditation just as frequently.

Is meditation an appropriate practice for children? Is it beneficial to them, and if so, how? In this section, we’ll answer any lingering queries.

20. Meditation is growing more prevalent among children, with more than ten times as many children utilizing it in 2017 as in 2012.

Meditation is growing in popularity among children, according to a recent poll of 5,000 American children by the Mindfulness Research Bank at Columbia University. In 2017, 5.4% of children aged 4 to 17 had meditated in the preceding year, up from 0.6% in 2012. The proportion of boys and girls who meditated was pretty similar.

21. Meditation use was higher among children aged 12-17 than among those under 12

According to meditation statistics from 2018, 6.5% of older children meditated, compared to 4.7 percent of children aged four to eleven. There were no significant differences in meditation use between races.

This section will examine the history of mediation and how it has evolved through time.

Headspace, a meditation software, has received 22.40 million downloads, which is not unusual.

According to Apple, meditation apps were the most popular app trend in 2018.

22. The meditation and mindfulness industry generated about $1 billion in revenue in 2015

However, this data does not include revenue from mindfulness apps and wearable devices used during meditation.

Is it true that meditation may help both students and employees? We’ll investigate how meditation is used in schools and businesses.

24. In 2019, employers provided mindfulness sessions or training to around 43% of their employees

According to the National Business Group on Health (NBGH) annual survey, 42 percent of businesses with at least one employee reported establishing a meditation program in their workplace. According to the NBGH’s meditation workplace statistics, this is a significant increase from 36% in 2017 to 52% in 2018.

25. Meditation has been shown to increase employee productivity by 120%

Employers who employed meditation in their businesses reported an 85% decrease in employee absence and a 520% boost in profitability.

26. In 2012, meditation was included in the curriculum of 91 American high schools

Meditation is becoming increasingly popular in schools due to its multiple benefits. It can, for example, assist reduce class absenteeism and bad behavior.

27. Meditation assisted in a 45 percent reduction in school suspensions

Suspensions fell after one school implemented a meditation program. This data on meditation in schools and its statistics provide additional evidence that meditation may benefit the classroom because it is thought to increase children’s performance.

Meditation provides numerous health benefits, including improved heart health, reduced back discomfort, improved memory, and more. It also aids in relaxation, stress reduction, anxiety reduction, and improved sleep. Given this environment, it’s not surprising that meditation statistics suggest that this ancient technique is becoming increasingly popular in the United States and worldwide.

People are becoming more conscious of how our stressed lifestyles affect our physical and mental health. As a result, they are looking into different means of achieving serenity.

And meditation is a fantastic way to achieve inner peace.

Is meditation a feasible option for mental health?

Meditation has multiple proven benefits, according to a study. This is not the same as being scientifically confirmed to be correct. Studies have indicated that meditation can help with anxiety and sadness. Furthermore, research suggests that meditation may help with various health issues, but this has yet to be formally verified.

How large is the meditation market?

Are 30 minutes of meditation sufficient?

According to studies, meditation has several benefits. You do not need to meditate for 20 minutes or longer to reap the benefits. Shorter bursts of meditation may still be beneficial, particularly if you’re starting. As a result, you can start by focusing on brief intervals and then progress to more extended periods of meditation.

Is it true that meditation is becoming more popular?

According to the most recent meditation statistics, this ancient practice is prevalent in the United States. According to the Pew’s Research Center’s 2014 Religious Landscape Study, 40% of Americans meditate weekly.

Statistics for this article on meditation statistics were collected from the following sources: